The Biblical Principle of Individuality: A College Paper

As I’ve shared previously, our oldest daughter—a Principle Approach® homeschool graduate—is now attending Bradford Christian College (a Principle Approach® college). That said, she has graciously offered to share one of her papers from her Biblical Life Principles class. In this way, parents and high school students are able to get a glimpse of how these studies look through Bradford Christian College. 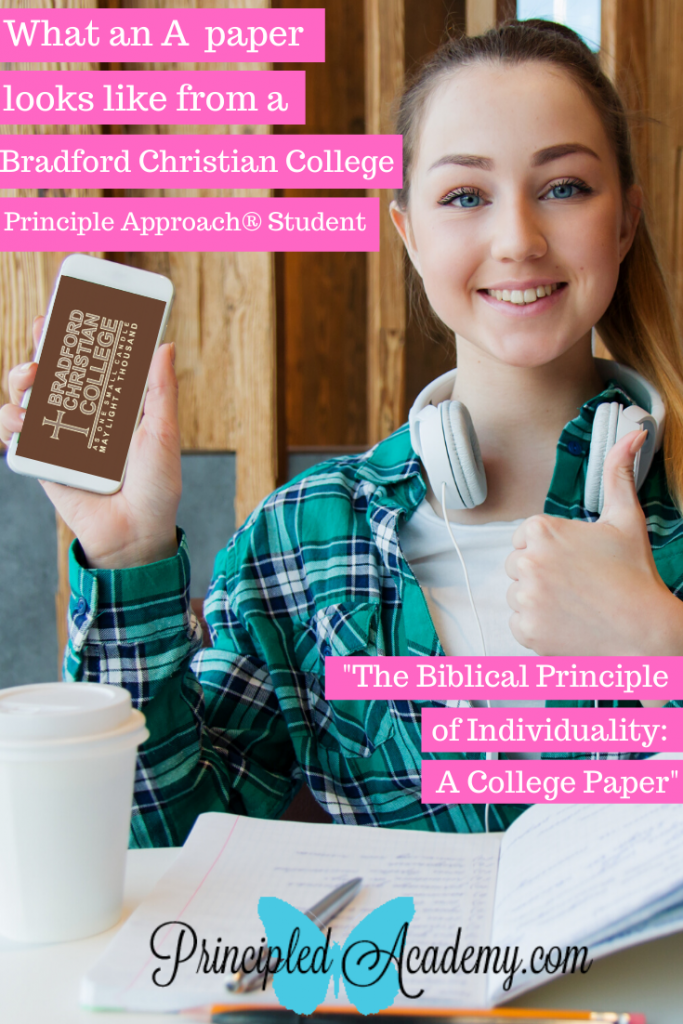 The Biblical Principle of Individuality

Individuality is a key principle that is important to understand from a biblical perspective. God’s design of individuality can be found all throughout Scripture and relates to each of us today. In fact, this principle is applicable to every area of life. It is a beautiful design that helps us to understand more about God and His creation.

However, there are people who have twisted God’s view of individuality, altering it from its original meaning. Specifically, some adhere to the idea of collectivism – meaning that one cannot be different from anyone else. Others adhere to the reasoning of Individualism, which essentially gives mankind that ability to do and believe whatever they want with no restraints. Both of these concepts are not promoted by God’s Word. In fact, the Biblical Principle of Individuality does not lean quite so far on either side of the spectrum. Instead, it is a beautiful balance of unity with diversity. However, many people do not understand this. Consequently, they adhere to false views of individuality. Thus, it is important to study this principle from a biblical perspective.

In Webster’s 1828 American Dictionary of the English Language, the word “individuality” is defined as “separate or distinct existence; a state of oneness.” From this definition, we learn that “individuality” focuses on the idea of unity with diversity. For example, while you and I are both human beings (unity), we are not exactly the same (diversity). More often than not, we are distinctly different from one another. Part of Webster’s definition of “distinct” is “having the difference marked; separated by a visible sign, or by a note or mark…” In this instance, Webster is mainly talking about external differences.

Going back to the example of human beings, there are many differences that we can observe. There are differences in our hair color, eye color, fingerprints, height, skin tone, and the like. However, we are not just different externally. When looking at the definition of “state,” we find that it is a “Condition; the circumstances of a being or thing at any given time. These circumstances may be internal, constitutional, or peculiar to the being, or they may have relation to other beings.” From this we can understand that we were designed to be in a state in which we are different from each other internally. Some examples of this could be our thought processing, our character, and our relationship with God.

“Unity” is a key word from the definition of “oneness.” In his dictionary, Webster defines this word as: “(1) The state of being one; oneness. (2) Concord; conjunction. (3) Agreement; uniformity.” Another related definition is that of “one,” which is defined as “Single in number; individual. (4) Different; diverse. (8) Single by union; undivided; the same.”

One of the opposites of being “unified” or “one” is to be “disconnected.” According to Webster, “disconnected” means to be “separated; disunited.” He goes on to say, “This word is not synonymous with unconnected, though often confounded with it. Disconnected implies a previous connection; unconnected does not necessarily imply any previous union.” Thus, we can make note that individuality can involve both remaining separate from something or becoming separate from something. There is a difference between the two. For example, consider someone who has chosen to become a Christian. Have they always been disconnected from the world? Or will they have to go through the process of disconnecting themselves from the world that they were once attached to? Naturally, they have to become detached from the world because of their past connection to it. When we do this, we become “unconnected,” which means “not connected; not united; separate.”

When looking at the Bible, there are several things that we can learn about God’s Principle of Individuality. On the personal level, we learn that while all of us are created in God’s image, we are each different from each other in many ways. We are also told that each individual is important to God because He created each of us with a purpose (Matthew 10:29; Luke 15:4-7).

Another important aspect of this principle is the fact that without living in unity with Christ, mankind’s sinful nature will continue to grow worse (Luke 11:26). As a result of our sin, we will continue to be separated from God (Matthew 25:31). Therefore, a lot of emphasis is put on our need for a Savior. When we become followers of Jesus, we become unified with Christ. However, this does require each of us to become fully separated from the world and fully committed to following Christ (Numbers 6:2-8; 1 Kings 8:53; Matthew 25:31; 2 Corinthians 6:17; Luke 12:52; Leviticus 10:10; Luke 14:26). This clear distinction is considered a high priority. We are also told that when we become unified with Christ, nothing can separate us from Him and His love for us. Romans 8:35 says, “Who shall separate us from the love of Christ? shall tribulation, or distress, or persecution, or famine, or nakedness, or peril, or sword?” Romans 8:39 adds: “…nor height, nor depth, nor any other creature, shall be able to separate us from the love of God, which is in Christ Jesus our Lord.”

When looking at the family level of application, there are a few things that we can learn. First of all, we, as believers, are called to be different from our unbelieving family members. In Luke 12:52, Christ told His followers that: “For from henceforth there shall be five in one house divided, three against two, and two against three.” A couple chapters later, Jesus also said: “If any man come to me, and hate not his father, and mother, and wife, and children, and brethren, and sisters, yea, and his own life also, he cannot be my disciple.” (Luke 14:26). However, there are some instances where an entire family believes in Christ and division does not happen. In these cases, we are encouraged to do our best to live with each other in Christ’s unity because “…every city or house divided against itself shall not stand.” (Matthew 12:25).

One of the ways that Christ’s unity can be shown in the family is when each individual accepts their responsibilities within the function of the family. And when each one selflessly apply themselves to their duties. Whether you are a husband and father, a wife and mother, or a child and sibling, you have responsibilities. However, each family member does not have identical roles. Therefore it is important that each family member understands their unique responsibilities and willingly performs them with joy.

There are also several things that we can learn about individuality within the church sphere.  We are told that God will call different individuals to perform a unique task that He has prepared them to do (Acts 13:2). Additionally, we are told that while we may come from different backgrounds or ethnicities, God considers us all as one body. Romans 10:12 says, “…there is no difference between the Jew and the Greek: for the same Lord over all is rich unto all that call upon him.”

This is reaffirmed later on in Scripture, when Paul states, “For as the body is one, and hath many members, and all the members of that one body, being many, are one body: so also is Christ.” (1 Corinthians 12:12). This verse comes from a passage that covers the different roles that each Christian has. Paul explains that while we have unity because of our shared belief in Jesus Christ, we are not all called and prepared to do the same things. Instead, God wants us to follow the unique calling that He has placed on each of our lives. When all of the believers do this, we are able to function in unity as one body because each member is doing what they are called to do. David declares in Psalm 133:1, “…Behold, how good and how pleasant it is for brethren to dwell together in unity!” However, we cannot have true unity without the help of the Holy Spirit as stated in Ephesians 4:3, which says, “Endeavoring to keep the unity of the Spirit in the bond of peace.”

When we look at the social and civil aspects of this principle, there are many things that we can learn. In a way, they relate to 1 Corinthians 12:12. Without a doubt, each unique part must work together in order for the community to function as a whole. If one branch of the social or civil structure does not do its part, things can become confusing and chaotic. In Matthew 12:25, Jesus told us that: “…Every kingdom divided against itself is brought to desolation; and every city or house divided against itself shall not stand.” But in order to have true unity in the social and civil spheres, these areas must function according to the biblical principles that we find in Scripture.

Without a doubt, there have been many attacks aimed against the Biblical Principle of Individuality. Therefore, it is critical that believers are well-grounded in the truths that we find in God’s Word. God calls us to be different from the world and to be unified with Christ. Additionally, He calls believers to each do their part in order to help the church to operate as one body in Christ. This calling also relates to the family, social, and civil functions. When we apply the truths of this principle to our daily lives, we will see the Holy Spirit working in many ways in order to bring unity with diversity.

Webster, Noah, and . Noah Webster’s First Edition of an American Dictionary of the English Language, 1828. 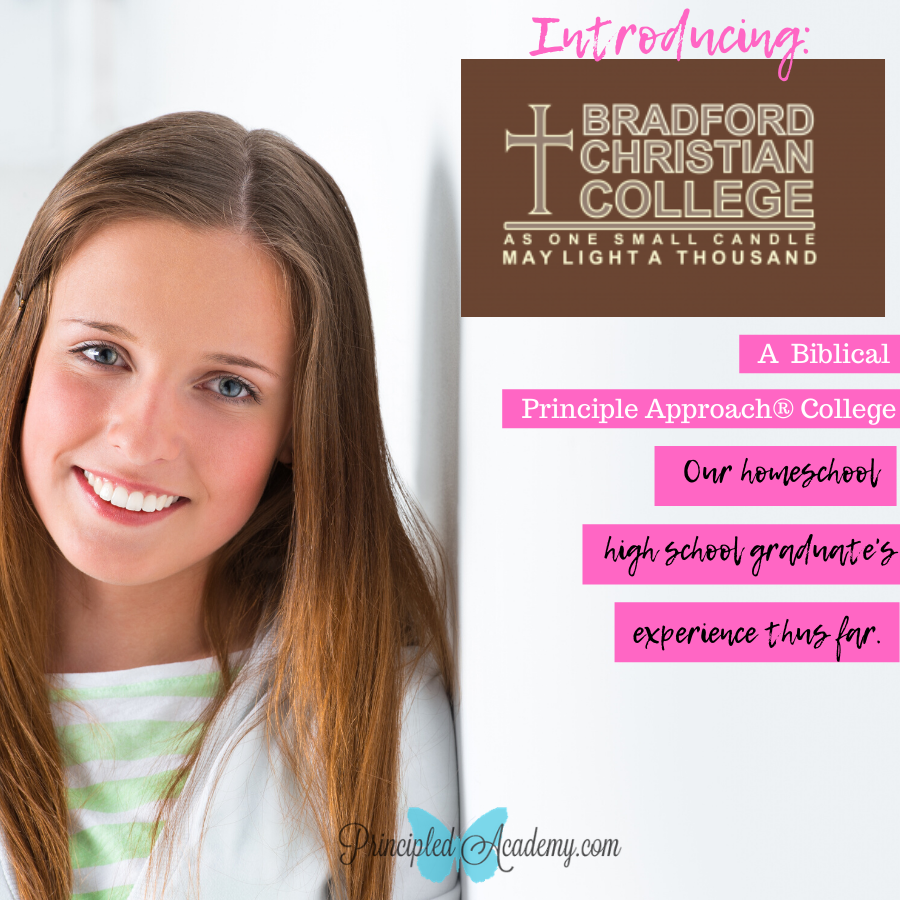 Introducing Bradford Christian College Well, here we are! Two of our Principle Approach® homeschoolers are homeschool graduates. One is attending a brick and mortar Christian… 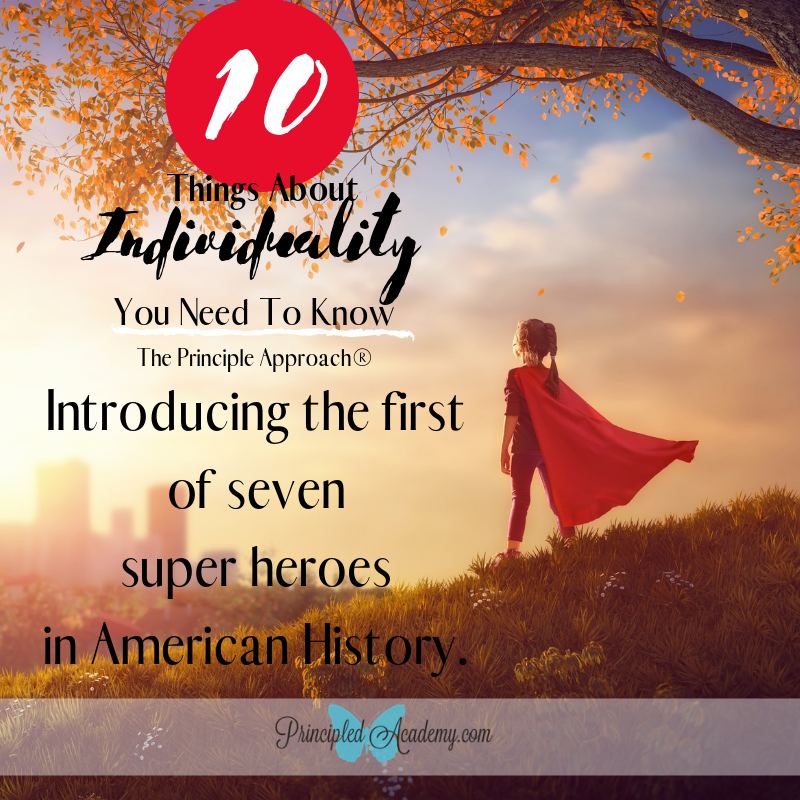 10 Things About Individuality You Need To Know Ah individuality… it seems to be getting drowned out in our society, doesn’t it? But you know…